Marquette Transportation Company is facing a potential class-action lawsuit after one of their crane barges struck the Sunshine Bridge in St. James Parish, Louisiana. The boat operator, who is still unnamed, is alleged to have been travelling along the Mississippi River when its crane, extended roughly 100 feet in the air, struck the southeastern side of the bridge. The damages to the bridge could total up to $5 million in repairs. 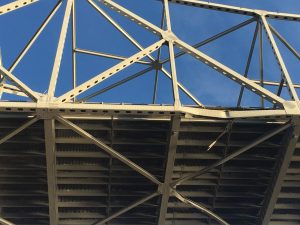 It is reported that the bridge is used by roughly 20,000 travelers every day. The lack of the bridge causes a detour that could add an additional hour to one’s drive, and the added time results in added financial burdens. Standing in the plaintiffs’ way is the ninety-year-old Robins Dry Dock rule which protects operators from being held liable for tertiary economic damages caused by accidents on the water. Subsequently, some maritime attorneys claim that because the accident occurred on a river and because nearby residents do not own the thing that damaged, the lawsuit applies to the bridge’s repair costs alone.

The negligence of the barge operator is almost undisputed. Rather, the scope of the dispute surrounds the damages for which Marquette can be held responsible. A recent search through a U.S. Coast Guard database shows record of Marquette vessels colliding with bridges 32 times since January 1, 2013; however, the company has neither faced a single penalty for these incidents, nor paid any compensation. In fact, going back further to 2006, there is evidence that another Marquette vessel struck the same bridge (the Sunshine Bridge) causing $2.1 million dollars in damage. In light of this history, the transportation company could be facing a lawsuit for punitive damages, though no injury or death occurred, on the basis of repeated employee wrongdoings as a result of purported negligence at the institutional, corporate level.

The attorneys of Broussard & David are skilled in holding responsible at-fault parties for incidents resulting from negligence on the individual or corporate level in maritime cases and vessel collisions. Contact them to discuss your legal rights at (337) 233-2323 (local) or (888) 337-2323 (toll-free).