On Monday, 17-year-old Madison Bradley was riding on a pontoon boat in Blind River, driven by 33-year-old David Crowe.

Bradley, along with a male passenger, was standing on the front of the boat past the guard rails when they struck the wake of a nearby boat. They both fell overboard into the water, with the male having minor injuries; Bradley was hit by the vessel’s propeller, suffered severe injuries, and did not resurface.

Authorities were informed that there was a missing boater and Bradley’s body was found around 8 P.M.

END_OF_DOCUMENT_TOKEN_TO_BE_REPLACED

On Sunday, August 9, 2021, a party barge reportedly operated by a Lafayette resident hit a group of children on an inner tube on False River. The children ranged in age from 8 to 14. The boater(s) reportedly fled the scene of the accident. Investigators say that the driver of the boat went home and refused to take a sobriety test.  The Department of Wildlife and Fisheries is investigating the incident.  Although there were no fatalities, one of the children was airlifted to a Baton Rouge hospital and may face prolonged recovery time.

Broussard & David reminds boaters and spotters to be vigilant when operating a vessel and/or pulling a tube. Further, please take boater education safety courses offered for free at the Louisiana Department of Wildlife & Fisheries website: https://www.wlf.louisiana.gov/page/boater-education.

The attorneys at Broussard & David have the knowledge and experience necessary to handle boating and tubing incident cases and will fight to obtain fair compensation for the injuries of yourself or your loved ones. If you, or a loved one has suffered harm because of the fault of another, contact the attorneys at Broussard & David to discuss your legal rights at (337) 233-2323 (local) or (888) 337-2323 (toll-free).

An average of 16,500 car accidents occur daily across the United States. In the blink of an eye, a rear-end car accident can completely turn one’s life upside down by causing life-altering injuries. Such an event can leave one lost as to what to do next, scared as to the daunting recovery process that lies ahead, and confused as to where to even begin. Some insight into the expected process of legal settlements may aid you or a loved one in making important decisions following a tragic accident.

In Louisiana, a car accident resulting in an injury, death, or property damage resulting in over $500 requires the parties by law to contact the local police department. Following the accident, an injured party should seek legal assistance. This will significantly offset the post-accident burdens of both filing a claim with the negligent party’s insurance company and gathering  supporting evidence like medical examinations, photos, and witness testimony.

Further, an attorney can file suit against a negligent party, thereby holding that party liable for their actions. The lawsuit must be brought within 1 year of the date of the accident or else the claim is forever lost. Once the legal process begins, parties will work tirelessly to reach what is known as a settlement. A settlement resolves the dispute by dropping the claim before reaching trial in return for a monetary compensation. Settlement processes can last anywhere from a few months to a few years depending on the severity of the injuries and the accident. In the settlement process, the injured party seeks recompense for physical pain and suffering, repair or replacement of their car, medical expenses, mental anguish from the accident, lost wages, as well as other forms of damages.

END_OF_DOCUMENT_TOKEN_TO_BE_REPLACED

In November of 2017, Galvan Alejandro Jr. and William Rhodes were traveling in Vernon Parish, Louisiana when Alejandro, the driver, lost control of the vehicle, went off the road, struck a culvert, and hit several trees. Despite wearing a seatbelt, Rhodes, the passenger, was ejected from the vehicle and killed. The driver sustained only moderate injuries. Suspecting alcohol and excessive speeding as causes for the crash, in January, Louisiana authorities arrested the driver for vehicular homicide and reckless operation.

Louisiana law defines “vehicular homicide” as “the killing of a human being caused . . . by an offender engaged in the operation of . . . any motor vehicle” when the driver is under the influence of alcoholic beverages or other intoxicants. If convicted of vehicular homicide, the driver can be fined and imprisoned for no less than five years and no more than thirty years. In addition to facing possible jail time, under Louisiana law, a drunk driver can face liability for punitive damages, which can be awarded in addition to compensatory damages in some cases. Louisiana Civil Code article 2315.4 states, “exemplary damages may be awarded upon proof that the injuries on which the action is based were caused by . . . a defendant whose intoxication while operating a motor vehicle was a cause in fact of the resulting injuries.”

END_OF_DOCUMENT_TOKEN_TO_BE_REPLACED

A two-car collision in Baton Rouge last Saturday resulted in the death of a Memphis man and an injured local preacher.

George Mabon and Reverend John Pitzer were passengers in a Mercedes when it was stuck at the intersection of South Acadian Thruway and North Boulevard.  Authorities believe that a southbound Nissan ran the red light and struck the back of the west-traveling Mercedes.  Pitzer suffered fractured ribs and was transported to a local hospital.  Mabon did not survive the crash.

The unidentified Nissan driver has yet to be charged, pending an ongoing investigation that involves accident reconstruction and the driver’s blood test. However, charges have already been filed on the driver of the Mercedes, John Baur of Memphis, after officers observed visible signs of intoxication at the time of the accident.  Responding officers reported that Baur’s eyes were red, his balance unsure, and his breath and person smelled of alcohol.  A field sobriety test was conducted and Baur’s blood-alcohol level registered 0.13 percent.  In Louisiana, a blood-alcohol content of 0.08 percent or higher is considered presumptive evidence of drunk driving.  Baur was booked on counts of first-offence DWI and reckless operation, with other possible charges pending.

END_OF_DOCUMENT_TOKEN_TO_BE_REPLACED 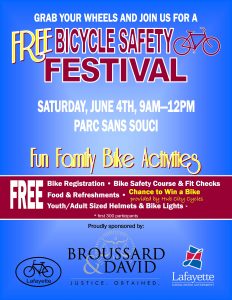 The first annual Bicycle Safety Festival will be held on June 4th from 9am-12pm at Parc Sans Souci in downtown Lafayette. The Bicycle Safety Festival is presented by Lafayette Consolidated Government, Bike Lafayette, and Broussard & David, LLC. There will be free adult and youth bicycle helmets for the first 300 participants, free bike registration, free safety training and instruction, and participants are eligible to win a free bicycle (valued at $300 – courtesy of Hub City Cycles). Additionally, there will be food, refreshments and musical entertainment by Zydeco Radio.

In Acadiana, there have been far too many cyclists injured in preventable bicycle accidents. The aim of this event is to help cyclists and motorists become more knowledgeable about bicycle safety and the rules of the road. As Lafayette Consolidated Government embraces more bicycle lanes and smarter growth, bicycle awareness is becoming even more essential.

Broussard & David, LLC, a law firm located in downtown Lafayette, has a great deal of experience in representing people catastrophically injured in bicycle related accidents. In sponsoring this event, the partners at Broussard & David, LLC hope that — through education and training — the roads will be safer for bicyclists, motorists and pedestrians alike.

A collision on the Lake Pontchartrain Bridge caused a 90-minute closure and left two women with moderate injuries last Friday.

Alvin Kimbrel of Belle Chasse was cited for careless driving after failing to recognize a vehicle as stalled in the right lane of the southbound side of the highway.  Kimbrel’s Ford F250 hit the other vehicle, a Dodge Ram containing driver, Alicia Lee, and passenger, Kala Perkins, at 65 miles per hour.  The force of impact pushed the Ram approximately 434 feet and caused it to catch fire, according to authorities.  The two women were aided in escaping the burning vehicle by a state trooper who was near the scene at the time.

According to reports, the Dodge Ram had experienced engine failure while on the Bridge and had coasted to a stop.  Despite having its emergency flashers activated, Kimbrel failed to recognize that the vehicle was stopped and thus did not take evasive action.  Kimbrel’s Ford flipped and landed on its wheels, blocking the remainder of the highway.

END_OF_DOCUMENT_TOKEN_TO_BE_REPLACED

An incident during last year’s Krewe of Excalibur Carnival parade in Metairie has resulted in civil repercussions.  Don J. Dauzat, 52, was struck and killed by an allegedly drunk motorist who was purportedly pursued by a Jefferson Parish Sheriff’s Deputy at the time.  Now, Dazuat’s family has filed a wrongful-death suit in the 24th Judicial District Court in Gretna, naming the Jefferson Parish Sheriff’s Office, Excalibur, King Arthur, PFJ Float Co., and others as defendants.

According to the suit, Dauzat had finished dropping off the float he was pulling for the Excalibur parade and was transporting a tractor to a staging area for the Knights of King Arthur parade.  It was at this time, about 2:50 a.m., that he was struck by a 2002 Ford Explorer driven by Michael Burrle near Lapalco Boulevard and Paxton Street in Harvey.  The impact caused the tractor to roll approximately 70 feet and flung Dauzat from it, resulting in severe injuries to his skull and brain.  He was transported to a New Orleans hospital but died less than a day later from his injuries.

Burrle was booked on suspicion of DWI and was eventually charged with vehicular homicide to which he plead not guilty.

END_OF_DOCUMENT_TOKEN_TO_BE_REPLACED

A New Orleans parade route had a bit of an interruption on Friday, January 29, when an 18-wheeler struck a tree along the route.  The impact caused a large branch to fall on six people, injuring four.

The four Oshun and Cleopatra attendees were treated for minor injuries, according to New Orleans Police Department.  Local fire department and emergency personnel were also on the scene, which occurred at the intersection of Amelia Street and Saint Charles Avenue.

According to nola.com, a witness stated that it looked like the driver was attempting to avoid the crowd when he struck the tree at around 7:50 p.m.  A city clean-up crew arrived to cut and transport the branch to clear the street.  The work was completed at around 10 p.m.

END_OF_DOCUMENT_TOKEN_TO_BE_REPLACED

A two-vehicle crash involving four individuals occurred last Sunday in Crown Point.  Two were injured, one of whom, Susan Tiano, 71 of Lexington, Massachusetts, was later pronounced dead at University Medical Center in New Orleans, according to reports.

The incident occurred at the intersection of Bataria Boulevard and Leo Kerner Lafitte Parkway at 5 p.m. January 9, 2015.  According to the investigating officers, Tiano was a passenger in a 2015 Nissan Versa driven by Anton Becker, 75 of Newport, Massachusetts.  The Versa was driving southbound on Bataria, when, after turning left and disregarding a stop sign, it collided with a 2004 Nissan Titan driven by a Marrero man.

The two occupants of the Titan as well as Marrero were taken to a local hospital for minor injuries. Tiano, who suffered injuries significantly more severe was brought to University Medical Center by paramedics.