There is an urgent need for all blood types across the country. Every 2 seconds, there is someone who needs blood. One pint of blood can save up to 3 lives.

Broussard & David is partnering with Vitalant to host our second community blood drive of the year on Wednesday, July 27, 2022.

END_OF_DOCUMENT_TOKEN_TO_BE_REPLACED

Broussard & David law firm is excited to announce another FREE lunch for first responders next week.

In an effort to show appreciation to first responders and the critical role they play during the COVID-19 crisis, Broussard & David law firm will provide a meal to all uniformed fire fighters, police officers and paramedics on Wednesday, May 6 at Dwyer’s Café downtown.

In mid-April, the law firm offered a free lunch day at Judice Inn for first responders with the hopes of supporting local businesses as well as essential workers who put their own health at risk to serve our community. It was a great success with 289 meals served that day. Given the tremendous response, Broussard and David would like to continue the effort into May.

END_OF_DOCUMENT_TOKEN_TO_BE_REPLACED

The Bayou Bridge pipeline is a 163-mile underground oil pipeline intended to transport oil from the Louisiana-Texas border to St. James Parish. Many residents do not mind their land being used to house the pipeline, but many other residents are very opposed to the idea, claiming that the land being used is “not valueless, vacant land…. The property is part of a larger vital and vibrant ecosystem filled with life that includes trees, wildlife, fish, and birds, and it plays an important role in the economic health and well-being of the state beyond its borders.” Thus, for the landowners who filed the suit, the challenge is not about money, but it is rather about protecting the land.

The defense claimed that they had eminent domain over the land, allowing them to take it through expropriation due to the fact that the land was used for the public’s interest. The Court agreed, allowing them to continue the pipelines construction, but assessed a small penalty for trespassing—150 dollars to each plaintiff—given that they did not exercise due diligence in notifying the property owners prior to the beginning of construction. The plaintiffs continue to hold that it is not in the public’s interest to facilitate coastal erosion, the natural consequence of digging, carving, and drilling into Louisiana’s marshland. Additionally, the plaintiffs argue, the pipeline places the utilized land at risk of an oil catastrophe, citing Energy Transfer’s history of 3.6 million gallons of oil spilled in the last sixteen years.

END_OF_DOCUMENT_TOKEN_TO_BE_REPLACED 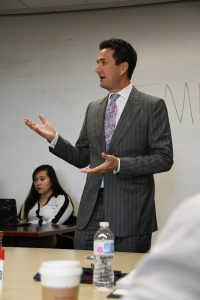 Blake R. David has been teaching advanced trial techniques to LSU Law students entering their final year of law school since 2016. David is a 2001 graduate of the Paul M. Hebert Law Center at LSU.